He was on the career track and never wavered. He went from high school to college, where he got a degree in commerce, and later to graduate school for accounting. Growing up, education was everything in his household, and he had made his mom and dad proud. “In our home, it was always education first, sports second,” he says.

“Participating in athletics was something for the weekends.” He was 23 years old, had a great job, owned two suits and a collection of dress shirts and ties, caught up on the financial news while riding the train to work every day and he received a nice paycheck. Plus, he had an amazing office view of the city’s skyline.

But he hated every second of every day.

“I had been at my job for 10 months and I’d look out of my window and daydream about riding and swimming and running,” he says. “I probably wasn’t a very productive accountant.”

He had been successful as an age-group triathlete, but what if he could quit his job and travel the world to race as a professional triathlete?

One day he gave his boss notice. “My boss thought I had another job offer, and he laughed when I told him that no, I was leaving to become a professional triathlete. He thought that was hilarious.”

But how to break the news to the folks? That was going to be a tough one. “For two weeks I would get up in the morning, put my suit and tie on, and my dad would drop me off at the train station,” he says. “Then I would get off at the first stop, go home and spend the day on my bike.”

Eventually, though, he knew he would have to face the music. When he finally broke the news to his parents his mom was supportive, but his dad was silent. “That was the worst,” he says. “I would much rather have him be angry and yell at me. When he went quiet, I said, ‘Dad, don’t be disappointed; be angry.”’

It turns out Dad was just processing the information. His dad’s response is something he will remember forever.

He bought an open-ended ticket to Europe, flew to Paris with $2,700 in his pocket and bought a triathlon magazine when he landed. “I stayed in these cheap Formula One hotels and raced three times every weekend. I was going to race until I either made it or ran out of money,” he says.

In one hotel he paid up front for three nights and ended up staying five. “The hotel manager kept coming up to my room looking for the money for the fourth and fifth nights,” he recalls. “I ended up climbing out the window and bailing [on the bill] for the last two nights. She’s probably still looking for me.”

Triathlon is a little different in Europe. He might have of had a smaller event on Friday afternoon and a bigger one on Saturday in the same city in France. Then he would hop the slow train Saturday night so that he could avoid paying for a hotel night, arrive in Switzerland in the morning and then race Sunday.

“One weekend I made $1,000 and I thought I was the richest guy in the world, that I’d never have to work again,” he says. “I was amazed and thrilled by it all. I wanted to prove to my mom and dad that I did do it properly, that I had made the right decision.” 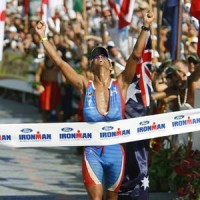